The Giant Pipeline DN5800 under our control 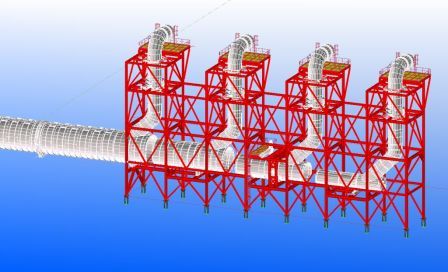 The company Fest Engineering Ltd. has participated in very important many billion conctract since the end of March 2012 – in the construction of steam-gas power station Poljarnaja, near the Russian city Salechard.

The city Salechard is situated 2436 kilometres from Moscow on the right bank of river Poluj, near Ob river delta. It is the only city in the World, where Artic Circle passes through.

The general supplier of the plant is company PSG from Otrokovice. Fest Engineering Ltd. is processing design and production documentation of steam piping DN5800,

pressure vessels and steel constructions which are part of the air cooled condenser. This facility is supplied by the company FANS a. s.

The construction of power plant Poljarnaja is part of the development plan for North Ural which will ensure better access to the local mineral wealth, including gas, petroleum and ores. This conctract is the key step to Czech-Russian partnership in the future.

The power plant Poljarnaja, which will just supply heat for the city Salechard, should be finished in the Mid-Year 2014.